Honoring the Spirit of the Fire

Honoring the Spirit of Native American Traditions
Earlier this week I was invited to a Native American fire circle. I really didn’t know what to expect but I said yes right away. As a matter of fact I didn’t even completely read the description my friend sent me, I trusted her, and the first four words sounded good to me:

“ To honor all life, all Veterans and warriors, all people, and all those who are traveling to the next realm. Sit by the fire and share in the stories told by the Native American Elders and by the storytellers. Come and hear stories told to share the values that sustain a culture.”

As I drove through the countryside just west of Manchester toward my friends house I marvelled at the life that is hidden in these woods. Sometimes I feel like living in New Hampshire is like being part of some secret society. There is so much heritage, so many people and lifestyles, such beautiful scenery, but you will never see it from the highway or in the movies or magazines. It is hard to describe, you just have to come and drive through the hills and valleys. It’s like nowhere else on earth.
This drive was a perfect set-up for the evenings event. I met my friend and we drove another 10 minutes to her friends house, Noodin, a storyteller and educator of Native American traditions. It was a very casual gathering of about 12 to 15 people in his backyard, sitting around a fire. It reminded me of the many years of family camping I did while growing up.
Noodin began by telling us that it takes a very long time to get a good understanding of Native American spirit teachings. He said that to really understand you have to learn the language, because Native Americans think differently and express themselves differently than white people. He said that words and expressions can have many layers of meaning so they are not easily translated. He also said that Native Americans teach and learn by “doing”. The spiritual, ethical and moral awareness comes through participating in the traditions and way of life. 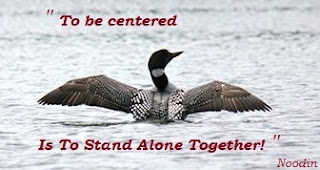 James B. Beard aka Noodin is the author of "White Mocs on the Red Road ~ Walking Spirit in a Native Way". Uniquely presented to aid people in gaining insight to the mysteries of the Elder teachings of the Traditional Native American.
You can own this book electronically (click) >>> Ebook, Ibook, Nook Book, Kindle Fire
Posted by James B. Beard aka Noodin at 2:57 PM