Wolf ~ Brother and guide to Man


When Wolf Steps In


Understanding what our animal helpers tell us.﻿

Though I have been attending Native American ceremonies for a few years, there were still many native people who would basically be cordial, but distant.  Especially the women of the tribe.  An Anglo stands out in this population and the people have become leery of visitors to their sacred ceremonies.

This particular ceremony was in the fourth day and it was nearing midnight. The ceremonies were ongoing and started early in the morning for that day. I was standing near the doorway of the teaching lodge listening to the teachings being given in the fom of oral stories of the people. An art and a way that is timeless in passing of the knowledge of the people.
To my surprise, a young woman in her early twenties walked up to me as I stood near the lodge doorway listening to the teachings being given inside.  “Excuse me”, she said, “I want to ask if you could help me.  I need a ride back to my motel.”  She looked down at her son, who was about four, and continued.  “We have been here since six thirty this morning and my grandmother is in the lodge right now.  It looks like it will be going on for a long time and my son is exhausted.”  I answered that I would be happy to give her a ride.
I could not help but feel honored that a woman of the people would trust me.  It must have taken a lot of courage for her to even ask.
When we got in the car she commented to me, “I am thinking of leaving the lodge!”
I thought about what she had said.  Why is she telling me, an outsider, this, that she would be thinking of leaving the lodge.
“Why would you want to leave the lodge?” I asked.
“I don’t want to, but my aunties on my rez are all Christian and they are always after me about my beliefs.  They tell me I am a pagan and devil worshiper.  That I will go to hell if I do not change my ways.  I am tired of their constant criticisms and if I leave the lodge they will get off my back.” She replied. 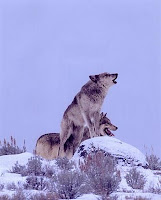 I answered.  “I really don’t know what I can tell you to help.  I am not a member of the Medicine Society and can’t be since I am not an Indian.  I guess all I can tell you is why I, a white man, would come to these ceremonies.”
I told her how I had come to be invited to ceremony a few years ago.  I spoke about how my brothers, Austin and Pellie, befriended me and began to share teachings that changed my life. How each time I come and help, I feel re energized and whole with myself.  What I had learned about myself and where I came from, so as to understand where I am going in this lifetime and on.  How I learned to laugh.

When I finished she said to me; “You have helped me see that this is my path.  I am going to stay in the Midewiwin Lodge and I now understand why this is so important for me and my son.  You know, it really is special how Creator puts signs on our road to help us when we need it.” 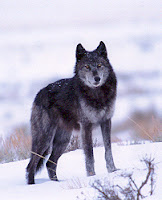 “Yes”, I answered.  “This trip seems to be all about seeing the signs.  On the way here, Pellie, my brother, and I went through several white out snow storms.  When it looked like it could only get worse, we saw a white wolf run across the road in front of our car.  We both knew the road would clear up after that and it did.  Then, a little further down the road, we saw a grey wolf on the side of the road, watching us pass.  We knew then that the road would stay dry for the rest of the trip.  I never would have accepted that a few years ago.  Today I know that Creator works with each of us in mysterious ways.”
There was dead silence in the car and I looked at her.  Her face was aghast as she looked at me.  I asked; “What is the matter?  Are you okay?”

She answered slowly and with deep reverence as she looked down at the little boy sleeping on her lap, “My son is White Wolf and I am Grey Wolf.” 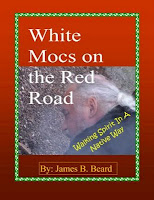 Nothing more was said until we arrived at her motel, some fifty miles from the Rez.  We both knew something very profound had happened, and it was not a coincidence I was the one to give her a ride to her motel.


Article by: James Beard aka Noodin

If you would like to read more about Noodin click on this book: http://www.northeastcultural.com/white_mocs_on_the_red_road.html
Posted by James B. Beard aka Noodin at 2:48 PM