You of little brain ! Smarter than we think !


The great minds of science know so much and yet ~ Do they really?
I read an article recently where science has determined that animals don’t really reason or think. They only respond instinctively to their habitat and in accordance to the particular evolution of their species. Some scientists disagree but this is the generally accepted thought.
In the spring the park receives our firewood packs to offer to campers. We keep a large supply at headquarters and a usage supply near our store for customers. The day the firewood was delivered I was on duty as ranger at the gate of the park. The truck rolled up with the firewood. I asked him to leave a couple of pallets of the firewood at the gate and then unload the rest of the supply in our storage yard. The driver unloaded three pallets and left the gate to deposit the rest of his load. 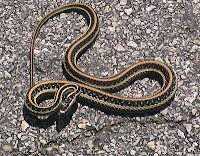 I opened the shed and began putting the firewood packages in the storage shed. I unloaded the first pallet and began to unload the second one when I noticed a Garden Snake coming out from under the pallet. I continued to unload the wood and then stacked the pallets against the side of the building. The snake was still on the roadway where the pallet had been that he came out of, so I gently prodded the snake off the road and watched as the snake moved on out into the woods. It felt good to know that he would find a good life here at the park.


Pretty soon the delivery truck came back and gathered the pallets. The afternoon went on without anything of interest happening. About three hours had passed and I went over toward the storage shed where the wood had been stored away. On the ground where the pallet had been was the snake. He was looking for his home.
It made me think of other times when animals that cannot reason seemed to know how to process a situation.
Pulling out a dirt road in Wisconsin one time I came up on a Doe deer with a Faun. The mother turned and faced my vehicle making me stop the car. She stood there snorting at me and acting as if she would charge the car. The Faun then ran into the bush off to the right. Once the Faun was clear the Doe ran up the road in front of the car and off into the bush to the left. This all happened in a matter of seconds but very clearly showed that the Doe knew exactly what she was going to do in that situation. She was prepared to sacrifice herself so her Faun would safely get away.
I live in the woods and see these things all the time. If I am going to the store I have to reason what to take, where I am going, what road I will use and make many other mental decisions based on thought and reasoning. Maybe it would be simpler to be “just an animal” and do all of these things instinctively.
There are many other encounters like this that have happened to me. They happen frequently, but what do you think? Any animals making intelligent decisions around you lately?

Ever watch a squirrel figure out how to get into a birdfeeder?

Article by: James Beard aka Noodin

To read more about Noodin go to this link ~ About James Beard aka Noodin, Author, Cultural Story Teller, Park Ranger