Excerpt from: White Mocs on the Red Road / Walking Spirit in a Native Way

Excerpt from:      White Mocs on the Red Road / Walking Spirit in a Native Way  by James B. Beard aka Noodin 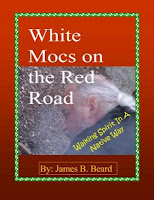 Purchase direct from the Author!  Each book will be personally signed and dedicated

If the experience of meeting Austin and his brothers had been the only experience of the ceremony, it would have been enough.  The first day of the ceremony begins at sun rise with the lighting of the ceremony fire.  Everyone attends and there were about three hundred native people present.  The fire keepers prepare the fire by setting up the sticks in a teepee form in the fire pit.   The men each pick up two thin sticks from a pile set at the side of the fire and gather in a circle around the fire.  The chief fire keeper then begins to hit the sticks together in a beat like a drum and to sing a song asking for the spirits to come and begin the ceremony. All of the men join in hitting their sticks together with the beat set by the chief and to sing the song for the fire.   A fire keeper then strikes flint and starts an ember in a nest of grass.  He fans the ember until the nest ignites.  It is then put into the fire.  As this is being done the people with the sticks chant and hit the sticks together to make a clicking drumming sound.  It does not take more than a minute to get the fire that is desired.  The people with the sticks then add them to the fire and the fire keeper adds more wood to build the ceremony fire.

As I stood there watching this event it was amazing to me that so much respect and acknowledgement would be given to the lighting of a fire.  But then, this was not an ordinary fire as I would come to understand in time.

The ceremony continued and a bowl was passed to collect tobacco from the people.  I stood there feeling somewhat uneasy knowing I had not brought any tobacco.  As the bowl was brought around a man tapped me on the shoulder and offered me some of his tobacco to put into the bowl.  I was grateful to this man for saving me from embarrassment.  When I turned to thank him I realized it was the same man that had saved my bacon when chopping fire wood.  It was Peter from the wood cutting the day before

The ceremony continued and when it was completed the people began to leave the lodge going from the south side of the lodge to the west end, making a tobacco offering to the fire, and walking out the eastern entry of the lodge.  Again I had no tobacco and again Peter handed me some tobacco.  “You really need to carry tobacco in a pouch”, he commented as we walked out.

I knew what had to be done.   I needed to find some buckskin and thread and make a tobacco pouch, but where?  I went back to our camp and asked Noreena if she had any buckskin.  “What do you want it for?”  She asked.  I told her what had happened.  “I need to make a pouch for my tobacco”, I said.  “I don’t have any buckskin”, she said, “but wait here.”  She went into the back of her motor home and came back with a beautiful buckskin pouch.  It had not been used and had a Crane painted on it and long tassels of leather.  It was the most beautiful pouch I had ever seen.  “Take this”, she said.  “No, I can’t”, I answered.  “Take it”, she said, “I have others and this one needs to go with you.”  I accepted it and gave her a hug.  How could she be so generous?

I found my can of tobacco and filled the pouch.  When ceremony started again I went back to the lodge, hoping to find Peter who had now helped me three times.  As I looked for him he came up behind me and tapped me on the shoulder.  I turned and he introduced himself.  “My name is Peter”, he said, “This is for you.”  He handed me a leather pouch filled with tobacco.   “Miigwich [me-gwitch / thank you”, I said.  “Where did you get it?”

He answered; “I made it in my camp after the last ceremony.  Figured you should have a pouch of your own if you are going to attend ceremonies”.

I thought to myself, “is this tobacco so important, really?”  I understood that it is to offer prayer to Creator and I even knew the Legend of Asema [ah-say-maa / tobacco], the man who would live forever in the form of tobacco to carry the prayers of the people.  There are so many legends about the tobacco.  Stories how bald eagle saved the world when he saw a grandfather and grandmother showing their grandchildren how to offer tobacco, the story of the Four Chiefs and many others.

To me tobacco was important in order to offer prayer because it was what my new found friends did.  I knew that any prayer to Creator is heard by Creator and that tobacco was just a kind of visible sign.  Indeed, we can always talk to creator and the many Spirit helpers of Creator.  So what is the big deal about tobacco?

Now I find myself frantically running around trying to find a pouch and making sure my tobacco is always available.  I am offering tobacco in fires at the camp, at the ceremony, in the water at the lake and to the ground when I get up.  What I am watching others do is having a personal effect on me.  I suddenly find that a little tobacco adds to the importance of the prayer I offer.  Knowing the teachings of tobacco make me realize that the prayers I offer are being answered immediately by Creator.  It’s kind of like email compared to, so called, snail mail through the post office.  I think the prayers offered to Creator are recognized by Creator directly from our heart and yet making this simple offering allows the added confidence that the prayer was given with the best possible acknowledgement of creator and in all sincerity.

This man Peter gave me the first of the teachings of tobacco.  Others had informed me of tobacco and I understood the traditional offering of tobacco when asking something of someone, or giving thanks to someone for a deed that they have done.  The traditional use of tobacco seemed more like a trade to me before Peter offered me his tobacco.  I gave tobacco to learn about the flute and in trade my friend White Crow shows me how to play and tells me how the flute came to the people.  Kind of like money is the way I used tobacco.  I give an Elder tobacco and he lets me into a sweat lodge.

Peter helped me realize the importance of acknowledgement in prayer and it started with tobacco, a pipe and a fire.  Through history, all spiritual beliefs use offerings to go with prayer.  It never made sense to me until now.  Maybe it confused me because of some of the things people of other faiths used for offerings like virgins, lives of enemies, animals and such. 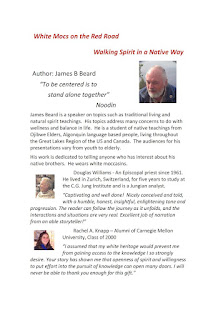 
To read more about Noodin click on this link: White Mocs on the Red Road ~ Walking Spirit in a Native Way