You can run but you cannot hide ~ a Bus

Saturdays are really busy on Mt Monadnock. Hikers come from all over the world to walk her

trails and see the beautiful views from the summit. The particular Saturday I remember is when I opened the park. Our regular hikers start showing up around seven or eight o:clock and we greet each one as they come in. At about nine o:clock one of our regulars mentioned that he saw a large tour bus headed up Rte 202 and wondered if it was on the way here to the park. I told him no buses were scheduled and that we normally do not allow buses on Saturdays because of the amount of traffic and limited parking. We started watching for the bus, knowing it would be coming. Then we received a radio call from the Old Tow Road entry. Taylor called over to let us know a bus had passed her entry traveling toward Marlboro, NH.

So the bus was not headed toward the park! Well, kinda not headed toward the park. A few minutes later we got a radio call from Taylor indicating that one of the resident neighbors was at her gate and complaining that a large bus had stopped in front of his home and let out about fifty people who crossed his land and started up the mountain. The manager came by our toll booth at about that time and we determined that we should intercept them along the trail and let them know they need to use the entry as well as pay the hiker fee at the park. I suggested to the manager that I could go over to the Old Toll Road entry and help out. She said that would be fine and off I went.

When I arrived at the Old Toll Road one of the rangers had already gone up the mountain to look for the errant hikers. Taylor was still at the booth and told me that our neighbor resident was really mad and gave her a hard time.

I asked her to describe the man. She told me he was middle aged with a grey beard and long hair. I had a feeling that I knew who she was describing. A year before one of the park trucks broke down in front of a neighbors house. We had to leave the truck to be towed and this neighbor was less than friendly about it. Then I decided to take a ride over to his place.

As I thought might be the case, there in front of his place was a huge tour bus parked along side of the road. I went up to the bus and tapped on the window. Pretty soon the driver came to the door. I introduced myself and asked if he had let people off at that place to climb the mountain. He said he knew this was not right and tried to tell the tour guide that. When he passed the sign for the park entry he figured something was funny. He told me the tour guide told him that the guide knew what he was doing and to just follow instructions.

I replied to him; “Well, you have two choices. You can stay here and the Marlboro Police will be by in a few minutes to give you a huge ticket for parking here, or, you can follow me back to headquarters and wait for your passengers there.”

The bus driver did not have to think too hard on that one. Soon the bus was following me back up to the main entry of the park to wait for his passengers. The hikers were intercepted and told to come down to headquarters after the hike to pay the fees and depart on their bus.

After a few hours we received a call from Taylor at the Old Toll Road. The hikers had come down 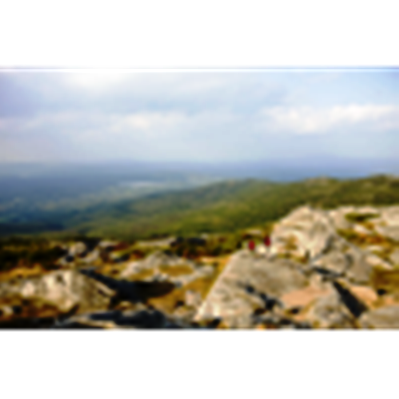 to that entry and the tour guide insisted that we send the bus over to pick them up. The park manager came on the radio and told Taylor to tell the tour guide that the bus would be sent over when we had confirmation that the fees had been paid. The total fee for all of the hikers came to $100.00 for twenty hikers. The tour guide complained a little more but finally relented and paid the hiking fee. The bus was sent over and all was good.

All of the tour guides I have encountered that come to the mountain are happy to pay the fee. They understand that the park is maintaining trails, facilities and patrolling the mountain to help hikers as well as protecting the mountain. It is rare for someone to go to such extremes to avoid supporting the park.

“To be centered is to stand alone together” Noodin
Posted by James B. Beard aka Noodin at 1:57 PM No comments:

by: James B. Beard aka Noodin


At Monadnock State Park in the Gilson Pond Campground I set up my summer camp in the early spring. Usually as soon as the snow has gradually melted away and about two to three weeks before the campground actually opens for the public. It is a peaceful, quiet time to sit by a fire with the stillness of the forest all around. This one night I sat there enjoying the fire when I heard a barking noise. No dogs are allowed on Mt Monadnock so it was a little bit of a surprise to hear a dog barking. I listened intently and the barking continued but it didn’t quite sound like a dog. Kind of a Woof, Woof but deeper and not as high pitched and rich in sound as a dog. The sound came from down around our lower loop of the campground and seemed to be moving up the hill. The next time it barked it sounded like it was almost in my site. Then I looked toward the bathrooms in the park and saw something run across the parking lot. It was about the size of a dog but more round and furry. I could not make out for sure what it was but it looked like a very large raccoon. It continued its’ barking as it went on up the hill and then it went away. I had never heard a raccoon make a barking noise before and thought that it was a little unusual. As summer came I would periodically hear my friend, Charlie the raccoon, barking his way around the camping area at night. Now and then I would hear a scream from campsites nearby as Charlie would meander through checking out the food sources.

One evening I was asleep in my camp. It was a very warm summer evening and the campground was full. I awoke when headlights shinned into my Pop-up camper. I had all the flaps down so it was kind of like a screen room and I was lying on the bed in my shorts with no covers. The light was immense like spot lights shining in and woke me instantly. I looked out and a girl had exited the car. She was standing in front of her car lights in nothing more than very brief panties and a bra. At first I thought I was imagining this but there she was calling in asking if anyone was there. I answered her and she said she needed to talk to me and I should come out. I told her to wait a minute while I put on some clothes. By the time I came out she had grabbed some clothing from her car and stood waiting for me.

I asked her what the problem was and she explained that she and her girlfriend were sleeping in their campsite, B-2. She heard a barking sound. Both girls were in hammock tents. When she looked out with her flashlight she saw a huge raccoon on the table going through their cooler. She explained that she shined her light on the Raccoon and tried to shoo it away but it would not leave. Then she and her friend threw sticks at the Raccoon to get it to move off. The Raccoon did not run off but instead started to charge at the girls. As they ran toward their car the other girl tripped and badly smashed her knee. That girl was sitting in the car sobbing as we talked.

I asked her what she wanted to do and advised her that she should take her friend to a nearby emergency room for treatment of the injured knee. She answered that she wanted me to go down to her campsite and make the Raccoon go away. Well, over time I have learned that Charlie the barking Raccoon fears no man and I was not about to challenge him at three thirty in the morning in his own element. I told the girls to go to the emergency room and if they got back before daylight to come to my camp for the rest of the night.  The girls did not return that night but Charlie had pretty much torn up the whole campsite. I decided to come back later to help the girls pick up the site. When I did come back the girls had gathered their things and were gone.

Every once in awhile I wake at night when I hear Charlie the barking Raccoon wandering about and I smile remembering the girl in the panties and bra looking for someone to do battle with him.

by: James B. Beard aka Noodin

“To be centered is to stand alone together” Noodin
Posted by James B. Beard aka Noodin at 10:25 AM No comments: