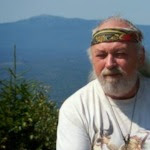 In this edition of Moccasin Tracks we introduce the show with a song from the CD Old School Eastern with the Eastern Medicine Singers, Spirit of Thank-you, Prolific The Rapper reporting from Standing Rock Dec 4 and Buffy Sainte-Marie singing Easy Like Snow Falls from Running For The Drum and Appleseed Records. Trevor Hall's song, Standing Like a Rock is also heard. Joining us by phone James Beard (Noodin),and Brenda and Lester Greenwood who tell us about their ongoing support they have organized for the Sacred Stone Camp. Their circles and groups share cultural teachings. Noodin has cultural knowledge passed on to him from Elders of the Ojibwa/Chippewa Tribes. more: www.northeastcultural.org

“To be centered is to stand alone together” Noodin
Posted by James B. Beard aka Noodin at 9:21 AM No comments:

JUST IN: The secretary of the Army Corps of Engineers told Standing Rock Sioux Chairman Dave Archambault II that the current route for the controversial Dakota Access pipeline will be denied. (12/04/2016) MSNBC reported 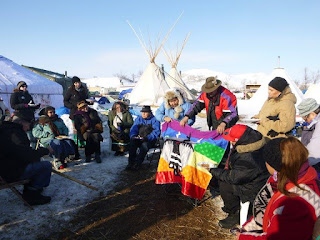 There is hope albeit somewhat restrained.. In all likelihood this decision will be quickly reversed under our new administration taking office in January 2017. So! Did our Native brothers and those of us that have concern for the environment win the war or just one battle?

A historical moment occurred on December 4th, 2016! Native Americans came together in the thousands and braved the North Dakota weather for six months to stand for protection of the environment and principally the water. More than three hundred tribes stand together. Concerned environmental groups joined them in the protest.

For the first time in the history of the United States a significant silent majority stood to not only defend the Indians but to support their effort. Thousands of U.S. Veterans spoke to a concern for the humanity, equality and values of Native people as well as the environment that we all must protect. More than two thousand veterans braved the North Dakota Winter to be at Standing Rock to protect against the atrocities incited by Oil Companies and State Officials against peaceful protestors. Millions of people spoke to support the protest on social media in spite of the lack of support from trusted national news affiliates.

The Army Corps of Engineers and President Obama acted in response to the protest to deny the continuation of the DAPL pipeline based on insufficient studies of the environmental impact of the pipeline. A study presented by the Oil Barons and Politicians who would benefit from the construction of the pipeline.

The winds of change have begun to favor the Native people and the interest of all who have been silenced in the name of progress. The Thunderbird is in the air and the Horned Black Snake must recoil. At least for the moment! The battle is not over and the war will continue.
There is a way toward peaceful resolution! It is a way to continue to progress technologically while respecting the creation around us. It has to do with living in accordance to the values that honor all life and applying those values to our technological progression. It is the principals given in the stories of creation all over the world in every culture.  The Ojibway Native Tribes refer to them as the Seven Gifts: Wisdom, honesty, respect, humility, courage, love and truth.

On average there is a pipeline break once every thirty hours in the Unites States.

“To be centered is to stand alone together” Noodin
Posted by James B. Beard aka Noodin at 10:32 AM No comments: